The Soft Core Sophistry editorial board has forcefully defended babies and criticized the use of force against them. Time and again we have argued that they are vital for a healthy nation and that attacks against them are barbaric, unjust, and have no place in the United States of America.

We’ve also crusaded for years against the underlying, systemic inequalities that have led to the conditions in which we now find ourselves.

As part of our exploration of these issues, SCS has published powerful arguments supporting babies, advocating for their healthy upbringing, and criticizing people eating them.

But SCS owes it to our readers to present counter-arguments, particularly by those who have good recipes. 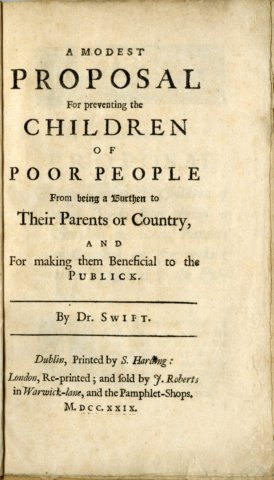 And I assure you, the recipes are fantastic.

We understand that many readers find Jonathan Swift’s argument painful, even dangerous. We believe that is one reason it requires public scrutiny and debate.

We have heard the outcry. Many of our own columnists have expressed their outrage, and we have seen our subscribers drop. This is heartbreaking, but we carry on in our mission.

We always strive to serve the public good by presenting not just our ideas about what is right, but also dissenting ideas, so that the public discourse can be opened to all.

We understand that many of you feel that a publication as esteemed as Soft Core Sophistry should not have published an argument that favors eating babies, or that it’s classist to suggest only eating the babies of impoverished families, and that doing so makes it seem as though we condone the argument.

Instead, we feel that we have earned that esteem precisely by publishing such pieces, by refusing to turn a blind eye to ideas that we disagree with, that are arguably immoral, and that our legal team assures us are not within the limits of the Constitution.

Yes, it would have been possible to write an article discussing Mr. Swift’s ideas instead of publishing them wholesale, to provide facts to counter-balance what was being argued, as many of our past articles have done. Understand, however, that would have been a lot of work and we were on a deadline.

Many staff members have said they fear for their own babies’ lives in the wake of our publishing this piece, and we assure them and everyone else that we will stand up for their rights and the safety of their babies. Should any of their babies be eaten, we will compose a very strong condemnation on Twitter and tweet it to all of our followers. This we promise.

This is a time of unprecedented turbulence in our lives. But we must not get swept up in our feelings and our own feelings of what’s correct. We must always be open to hearing arguments from outside voices, with opinions different from our own. If that means publishing the occasional article that calls for infanticide and light cannibalism, then that is the cross we must bear.

This policy is bigger than any one publication. This is what keeps us from becoming myopic. This is what brings to light the ideas that most want to keep hidden, but bear scrutiny.

It is also important to note, however, that we will not be scrutinizing it, debating it, or refuting it at this time.

I hope this lays to rest once for all the idea that we did anything wrong, which is what we’re really arguing about, instead of any merits about the piece published or how we handled it.

However, as one concession to the critics out there, we do promise to make all reasonable efforts to read pieces before we publish them in the future.