Chances are you’ve seen the news about this year’s holiday cups at Starbucks.

Rather than continuing past design trends and having snowflakes or ornaments on the cup, it’s a gradient red with the only decoration being the company logo.

This has, somehow, become national news, because it is being reported as a controversy. Let’s examine that take.

News outlets all over the country are reporting on this. Here are some sample headlines.

Reactions were swift. All over social media and website comment sections, people were quick to point out that Starbucks has never had anything more Christmas-y than snowflakes or generic ornaments on their cups, they still sell a “Christmas Blend” coffee and Advent calendars, and their employees are not actually prohibited from saying “Merry Christmas.” Among many, many other lucid points. 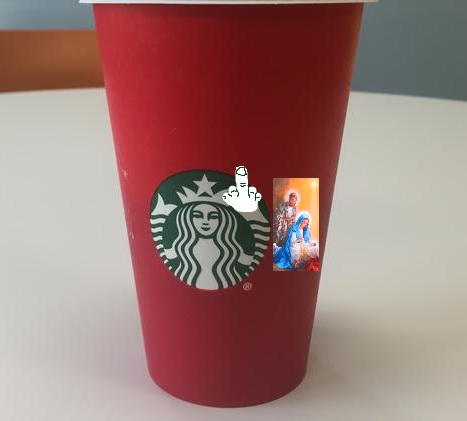 Such as that this wasn’t the actual cup.

It got so widespread that it seemed like the whole thing was a guerrilla marketing push by Starbucks–especially since the #MerryChristmasStarbucks hashtag actually promoted sending business to the company to protest the new cup.

Instead, it was a controversy without substance or backing. It was a storm brewed up by the media.

Check out the links above and you’ll see one thing in common: all of them rely on the same source.

Joshua Feuerstein, a former radio and television televangelist and current self-described social media personality, was the only one claiming to be outraged. While the AJC link does show images of people using the hashtag to show off their cups with “Merry Christmas” written on them, per his instructions, most of the rest of the articles talk about how there was a large amount of backlash to his claims.

The point in support of using Feuerstein was that millions of people watched his video, even though many of the comments on it were not in support of it. It was shallow reasoning to believe everyone who watched the video agreed with him. Millions of people watched a rat in New York drag a piece of pizza down the subway, but that doesn’t mean people are in favor of rats stealing their pizza.

There are two possibilities about why this story spread throughout the media. Either they are incompetent or they were perpetrating a War of the Worlds style hoax. Let’s examine both possibilities!
The first idea is that the people responsible for spreading this story are just bad at journalism. They either didn’t care or didn’t realize that there was only one source for the thesis of the story, that people were offended by disposable cups not having a Christmas theme.[1]
That source was a self-described social media personality![3] Have they been on the internet? It is full of people trying to make names for themselves by making outrageous claims! And they fed the beast. They took one man’s rant to be indicative of a larger whole and reported it as such, desperate for a story.[4] That is bad journalism.[6]
It’s great social media personality-ing though, so good job by Feuerstein. And for any incompetent reporters or producers out there, I’m happy to go on your programs and talk up a ridiculous satirical take on something. Look through my archive for ideas, or just let me know what you’d like me to say. I’m shameless!

The other possibility is that the media collaborated to produce a hoax (or it started that way and incompetent members of the media then pounced on the story). Just like with War of the Worlds, a report went out to shock the audience and cause an emotional outcry.

And boy did it work! As mentioned, the #MerryChristmasStarbucks hashtag is full of people mocking the original video. Facebook, Twitter, Instagram, and whatever other timewasting sites you prefer were full of people calling the controversy ridiculous.

That’s the point: it worked. People flipped out and were all too happy to believe this was a real controversy, all too happy to believe that a group they didn’t align with (conservative or Christian or Arizonan) was eager to be outraged by red cups, and they were all too happy to spew back their own vile. No one stopped to check if they actually knew anyone who was offended, or if they were shouting their snark into an echo chamber. People just kept assuming there was a large block of people being outraged, so they got outraged at something that didn’t exist. 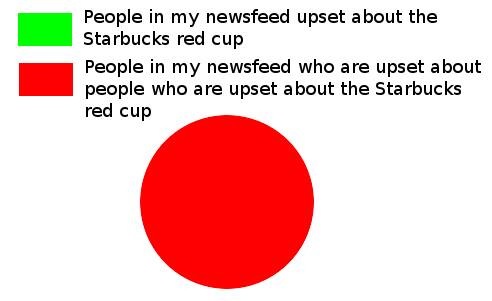 Admit it, this describes you.

Which allowed them to get on their high horse, telling Christians to not let a cup dictate how they celebrate their holiday and all manner of other self-satisfied riffs. With this “story” making so many act this way, we all lost.

For God’s sake, people, we made Bristol Palin the voice of reason.

1. How about a #HappyThanksgivingStarbucks hashtag though? It’s too early to say Merry Christmas to someone. Who wishes someone a happy six weeks from now?[2] ↩2. Happy Friggin New Year. ↩3. What kind of internet personality records a video in portrait mode? Do they not own a TV or computer monitor? ↩4. And with the presidential election now less than 12 months away![5] How could they possibly be hurting for stories? ↩5. Happy Election Day! ↩6. Speaking of shameless, I suppose I should mention somewhere that the cause got a boost when Donald Trump halfheartedly suggested a boycott of Starbucks as a result of the cups. But this came shortly after Trump fell behind Ben Carson in the polls and is desperate to keep himself relevant. Since Trump is currently taking internet trolling mainstream, we shouldn’t be surprised that he would say, well, anything at this point. If we have to take Trump’s words seriously, then we have failed as a society and should just let Canada very politely and kindly take over our country. Let’s leave Trump in the footnotes where he belongs. ↩