There’s a new arms race in the United States, a race the Americans have never lost.

They won the race to the atomic bomb, using it to help win World War II. They won the arms race against the Soviets to end the Cold War.

But who will win when the new arms race pits American vs. American?

Recently, Soft-Core Sophistry told you about the Los Angeles Unified School District receiving military equipment. They’re not the only ones either. And we all know what’s been going on in Ferguson, Missouri. There’s no question that police forces are becoming increasingly militarized.

The latest example comes from Marathon County, Wisconsin, where a 75-year-old man owed $86,000 and the police came to collect. Their resources included two dozen officers and an armored assault vehicle. 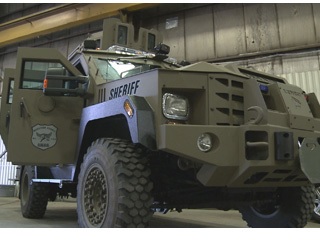 When threatened, the AAV will puff out its doors to make itself seem bigger to predators.

At the same time, arguments about the Second Amendment and gun rights have exploded across this country. Any time there is any violence in the US involving a gun, count on both sides to immediately and vociferously shoot off their mouths. So far, those in support of gun rights have been succeeding.

That means the populace has become better armed as well, with assault rifles continually upheld as legal under the Constitution.

So when the Marathon County Sheriff’s Department was called out to Roger Hoeppner’s house, they knew only that he had been problematic in the past, and had been charged with disorderly conduct before. They didn’t know what kind of arsenal he might have.

The police have to be more militarized because the threats they face in the general public have become more severe with the citizenry better armed.

And that means the citizenry needs to arm itself better, to help stop itself from being controlled by a police state.

Which means the citizens have to better arm themselves…

In this illustration, the mouse is the citizenry and the cat is the police. Unless it’s the other way around. The important thing is that we’ll blow up the world.

So where does it end? With everyone acquiring nuclear laser swords in an anime-like future?

No one can say. So let’s instead see if we can find out who the winners are.

Just like in the Cold War, the military-industrial complex will of course be making bank. Someone needs to be producing and selling all of these armaments.

You may remember the military-industrial complex as the bad guy in the first Iron Man movie.

But there is an even more insidious winner in this dance of weaponry, an even darker force that stands to gain.

Lawyers.
Going back to the Marathon County story, the curmudgeon who saw the assault force ride up to his front door is suing the city for $4.5 million, seeking damages for pain, suffering, emotional distress inflict, damage to reputation and economic loss. This may seem like an insane amount of money to seek in this situation[1], but his attorney argues the show of force was excessive and caused Hoeppner’s wife to go to the hospital.[2]

“Every action has an equal and opposite reaction by an attorney who’s about to get paid.” Isaac Newton said that. He knew what he was talking about.
1. Mostly because it is an insane amount of money to seek in this situation. ↩2. No word on what her condition was, but I imagine it was determined to be “conducive to helping you become a multi-millionaire.” ↩

One thought on “Will the new arms race in America be the most devastating one?”