This is in Denver. I am from Florida. I have never lived in snow before. Before now, snow was like crime, something that only happened to other people.

I have visited snow before, spending some time in Boston on trips during February, and one crazy week in Minnesota around New Year’s, where the snow was probably two feet deep. But those trips were like visiting a prison. It was weird and scary, but you have guides to keep you safe and in short time you leave and it is gone forever. Now I live in that prison. We are all victims of the consequences of our choices.

That’s a look out my front door. Now, you may see that and think “That’s not that much snow” and maybe you’re right. I don’t know. I’m from Florida. But I do know it’s October 4. The temperature here yesterday got to 79° and back in the tropical paradise I used to call home (and never considered paradise while I was there) it will likely get into the mid-80s today. The worst of winter is still to come. And I know exactly how that will turn out. 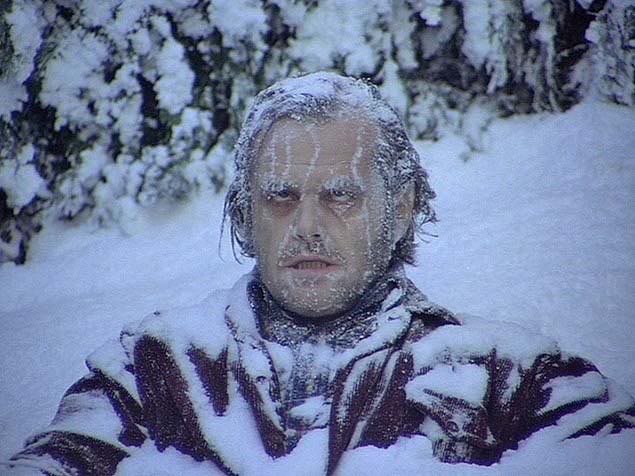 Artist’s rendering of me in winter.

It’s not so much that it’s cold. It’s that I have no idea what to do in snow. It just kind of goes everywhere. It’s hard to walk in. It gets you wet which makes you even colder.

My God, it’s even come for our cars! I guess I need an ice scraper. And… chains? Is that right? I guess to tie up to the oxen so they can pull the car like a sleigh?

When I first moved out here, I noticed the strange trend of Denver drivers driving below the speed limit. Almost everyone does. It’s not because they’re the most cautious drivers around. When the light turns red, the prevailing thought seems to be, “Ok, I have five seconds to get through this.” While turning left as the light turns red is common to me, here I’ve seen a few times where the cars waiting to turn left sit there as the light turns red (so cars going in the opposite direction can finish running the red light), then three cars turn left. You learn not to drive as soon as the light turns green.

So they’re not super conservative drivers. My next idea was that they’re all high. This is Denver. I pass several medical marijuana dispensaries on my way to work every day, and I work from home.

I still believe that idea has merit, but now I’m also thinking it’s because they’re used to driving in snowy, icy conditions. They run red lights because they’re used to not being able to stop. Driving cars here is like ice skating, except instead of some embarrassment when you fall on your ass, you pilot a 2,000-pound instrument of death into the screaming maw of entropy.

I guess I have to get used to this. If I survive, this is my new life.

No, wait, this is my new life: