On February 15, 2013, a meteorite slammed through the atmosphere and nearly destroyed a good portion of Russia.

An asteroid much larger than that passed close to Earth the next day.

In case you’re unfamiliar, here are the differences between the most frequently used terms for large hunks of rock hurtling through space, as explained by the talking dinosaur pals of Dinosaur Comics.

Aside from teaching us that every car in Russia apparently has a camera mounted on it (and that Russians are apparently nonchalant about the signs from Revelation, probably due to the Soviet regime’s practice of banning religion), we learned another very important lesson from this event: NASA is preparing to kill us all.

Now, I’m not saying they’re drawing these celestial bodies toward Earth or doing anything so direct. Rather, they are content to let the universe run its course and destroy us on its own, doing nothing to save us. Instead, they are planning on saving themselves. Consider this evidence:

NASA seems the only group on Earth currently capable of sending people off Earth to a sustainable world. They still have work to do to reach that end though. And it was nearly in grave danger. In 2010, President Barack Obama ended NASA’s Constellation Program, which was designed to explore sending manned expeditions to other worlds. Just a few months later, Obama reversed course, expanding NASA’s budget by $6 billion in a time of a federal spending freeze, and encouraging them to look into manned expeditions beyond Earth’s orbit, which has only ever happened when we went to the moon. What was told to Obama to change his mind so quickly and decisively? What could make sending men away from Earth such a priority?

A large asteroid capable of, at least, severely impacting the world is the only reasonable answer.

Many of you may be rolling your eyes and saying there are no asteroids of a significant size that are any threat to hit Earth any time soon. But ask yourself what you’re basing that on. Who tells us about threats from space? Who else? NASA.

What would happen if NASA announced that in 20 years, a large asteroid capable of producing an extinction level event was on course with Earth? They would likely be tasked with coming up with a way to save the planet, either by destroying the asteroid or–much more unlikely–evacuating the planet. That would prevent them from carrying out their main goal: saving themselves.

This is NASA’s operating plan for the next 20 years

This reminds me of another story, of a doomed planet, where the chief intelligence capable of working on the problem instead assured the rest of the world everything was fine, using the time left to save itself, dooming the planet to destruction. There was (depending on the story) only one other survivor of that planet, and he flew in a rocketship designed by his father to a faraway world. His name was Kal-El, better known as Superman. The creature that shirked its duties to try to save that world was known as Brainiac, a sentient computer that then went around the universe, plundering knowledge and destroying worlds, eventually becoming one of Superman’s greatest enemies. NASA is Braniac. 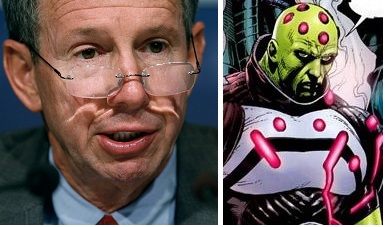 On the left is Brainiac. On the right is NASA head Michael Griffin. Can YOU tell them apart?

It’s not just casual indifference NASA is engaged in either. They have argued vehemently against letting private companies enter the space race, though President Obama did force them to comply with this. I’m sure NASA will find some way to deal with those interlopers should they have to. After all, the universe can have only one conqueror.

2 thoughts on “The Planet’s Greatest Villain”